I’m delighted to host a stop on Alexa Adams’ blog tour for her latest novel, Darcy in Wonderland.  Although not a Pride and Prejudice variation, this sweet story introduces us to Jane Austen’s couple some two decades after their marriage, and to their busy family, including the spirited and head-strong Alice.

Now, Alice cannot possibly have her adventures in Wonderland without a tea party of some sort, and a tea party just is not a tea party without scones, so please check out the accompanying post for a recipe for traditional English tea scones, complete with jam and cream. Lady Catherine would insist upon it, as long as you don’t spill your tea on her dress!

Darcy in Wonderland ~ by Alexa Adams

Once again, author Alexa Adams has forged a new path and given us a story that defies the convention of Jane Austen variations and continuations.  From the darkness of The Madness of Mr. Darcy to the twisted chain of events that lead to Becoming Mrs. Norris, she has proven herself as an original author with an eye for the unusual. Now, in a much lighter vein, she has meshed the Darcy family from Jane Austen’s classic Pride and Prejudice with Lewis Carroll’s Alice’s Adventures in Wonderland to send us topsy-turvy into a delightfully messed up world in which the best-laid plans of (talking) mice and men go quickly awry.

After twenty-some years of marriage, Mr. and Mrs. Darcy have a fine family and a very busy household, for they are in the midst of preparations for the coming-out ball for their eldest daughter, Ellie. But the youngest daughter, Alice, has little time for these boring logistics of preparing food and planning for visitors, because she is too busy wondering about the white rabbit with a pocket watch she has seen running through the garden! Her doting parents put her tales down to her vivid imagination and bid her to pay more attention to her lessons.

Then once day, Alice’s enthusiasm gets the better of her and she spills a cup of tea all over Lady Catherine, who is most certainly unimpressed with the turn of events. Consequently, Alice finds herself excluded from a planned visit to the Bingleys. With only her father for company, she once again abandons her lessons to take a walk in the gardens, and spots the White Rabbit once more! With her father in pursuit, she chases this strange creature into the shrubbery, and then into a large rabbit hole. Suddenly the two Darcys find themselves falling into a world that is strange beyond their imaginations.

Now we find ourselves in Lewis Carroll’s familiar world of Wonderland, complete with bottles that say “drink me,” cakes that say “eat me,” the mysterious Maryanne – or is it Mary and Anne? – and a house with gloves and a fan somewhere within. We meet the Cheshire Cat, the hookah-smoking caterpillar on the magic mushroom, the Mad Hatter and March Hare at their never-ending tea party, the Duchess with her strange baby, and of course, the King and Queen of Hearts with their peculiar army of playing-card soldiers.  While Darcy is most concerned with finding someone who can direct him back to Pemberley (should he ever grow to the proper size again), Alice is more interested in conversing with the fantastical creatures they meet and finding her way to the garden she has spied through a tiny door. In a crazy mixed-up world where no one has heard of Derbyshire at all, how will the Darcys ever find their way back home?

There are some wonderful characters in this story. Elizabeth is her charming self, although with decades of experience as mistress of Pemberley, she is a much more mature and assured version of Jane Austen’s heroine. Lady Catherine makes a short but important appearance, not having mellowed at all in the intervening years, and other familiar characters are present as well. As well, we meet the various Darcy offspring, including Bennet, a smart and sensitive young man ill at ease with himself in society (sound like anyone else we know?), and a bevy of daughters: Ellie, the debutante, shy Helen and witty Rose, who are both away at school, and Cassandra, who far prefers Sir Walter Scott’s novels to her lessons. And, of course, Alice, who is the star of the show. The interactions between the siblings is beautifully crafted, and for those of us with children, a little too familiar!

“You like [school]! You actually like it! Bennet never did, and even if he is odious, he has got some sense. Ellie liked it, but she has hardly any at all, so I made sure you should hate it,” Alice explained.

“Thank you so much for the compliment,” Ellie said bitingly.

“I thought her assessment rather accurate,” Bennet murmured to her in an undertone…

As well, we spend some time getting reacquainted with Mr. Darcy himself. He appears exactly as one might imagine him, some twenty years older and wiser, with all those years of Elizabeth’s teasing to loosen his stiff demeanour, while never quite losing it. He can still be proper and serious, but now knows how to laugh, both at himself and at others. 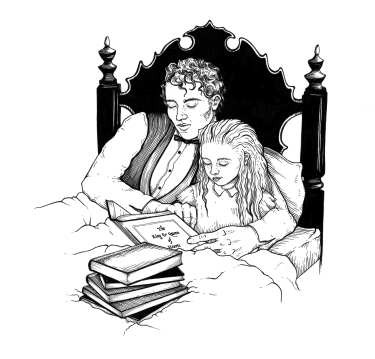 But the character who steals the show is little Alice. She is a delight – headstrong and imaginative, with her mother’s impertinence and a sense of wonder that is infectious.  She has no trouble offering her opinions, even when they are not wanted, and is happy to allow her curiosity free reign. While her poor father frets over the bizarre events around him in Wonderland, Alice happily accepts a world in which animals talk and people can grow and shrink with a nibble of food or a sip of some potion. From her first impulsive dash after the White Rabbit to her bewildered participation in the Queen of Hearts’ croquet game, she is never without something to say.

“It is just that I always have so very much to say. I really can’t speak quickly enough to get it all out. By the time I finish explaining one thought, five new ones have popped into my head. It can be quite difficult to choose which to share.”

There were a couple of minor areas in which I felt I wanted a bit more from the book. The interactions between the Darcy siblings were lovely, but I’d have loved more between Elizabeth and Fitzwilliam. We see them as parents, but not so much as husband and wife. While it’s not a love story, I still would have loved to have seen just a bit more of the Darcys’ private conversations, to see how they have grown into a mature and devoted couple. I also found the section in Wonderland to follow Carroll’s tale a bit too exactly, although the wink-wink references to Jane Austen’s other novels were lovely little touches, like Easter Eggs for the devoted Jane Austen reader.

Along with this sweet and light story, Ms. Adams has engaged the talents of her gifted sister Katy Wiedemann for a delightful series of illustrations, as well as for the cover.  These ink drawings add the perfect touch of whimsy and sparkle to the book, and are a treat for the eyes. Check out Ms. Weidemann’s scientific illustrations at http://www.wiedemannillustrations.com/

In conclusion, this is a delightful and fun story, suitable for readers of all ages. And don’t forget to enjoy it with a cup of tea and a plate of scones, because Alice must have a tea party. (Just please, whatever you do, don’t spill tea on Lady Catherine!)

Darcy in Wonderland is available here:

You can learn more about the author here:

11 thoughts on “Book Review (and a recipe): Darcy in Wonderland by Alexa Adams”